Caesar Monturano, originally from Philadelphia, has lived and worked in Williamsburg, Virginia since 1985. At his studio in Williamsburg he paints a broad variety of subjects, concentrating primarily on American landscape and architectural studies. His deep interest in history has led to many paintings of historic landmarks throughout the United States and Europe. He has painted commissions for the National Archives, The Kennedy Center, Christ Church, Alexandria, VA and for many private collectors. He has done many paintings of Colonial Williamsburg and, since 1986, the Foundation has featured an extensive line of his prints of Colonial Williamsburg. He also did a series of prints of Puerto Rico, which are shown through the National Parks in Puerto Rico. His line of prints of Washington, D.C. were featured for many years, at the National Archives and many of the major historical sites in the capital city.

Caesar Monturano’s early training, starting at the age of nine, was at the Fleischer Institute. He later studied privately with George Imhoff of Philadelphia, and Izthak Sankowsky and Martin Jackson at the Philadelphia Museum School. For several years, his work and studies took him all across Europe and the United States. From 1968 until 1977, he was director of the Blue Grass Art Center in Philadelphia. During this time the school developed into one of the largest privately operated art centers in the east, and turned out many students who went on to achieve successful careers in the fine arts. In 1977 Caesar stopped teaching in order to devote all of his time to his own work.

Essentially a representational painter, Mr. Monturano adheres to traditional aesthetic values in his work. However, each piece is developed from a subjective premise, using nature as a starting point in developing a unique interpretation. His paintings, especially his pastels, are noted for their spontaneous, yet sensitive use of broken color, creating an ethereal, impressionistic effect. This kind of image allows the viewer to use his imagination and join in the creative process with the artist. Using a highly sophisticated palette, derived from Spanish influences, he achieves rich color effects through the skillful application of mostly muted colors.

All of our giclee prints on canvas are printed here in our studio in Williamsburg, VA, using all archival canvas and fade resistant archival inks. Most of our matted prints are giclee prints on acid free paper and our lithographs are printed locally by one of Virginia’s foremost color lithographers.
If you ever have a question about any of my prints, feel free to call me at 757-784-1941, I will be happy to assist you. 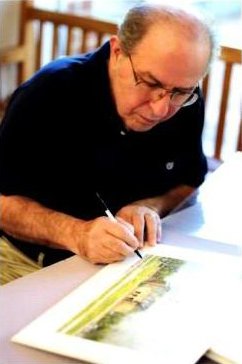